It's A Bloody Funny Play!

It has been great to have Martin Sherlock-Knowles, one of our founder members, return to work with the Company. He has directed our current production - Billy Liar by Keith Waterhouse and Willis Hall - and has brought it up to date with the inclusion of some filmed episodes. We asked Martin a few questions about his vision, his approach, and what else he has hidden in the sideboard...

Why did you choose to update Billy Liar?

First and foremost, I just wanted to hear Northern voices on a stage. When you read the text, it’s a fantastically well written play and probably the best example of a writer understanding Northern dialect that I’ve heard.

I’ve seen so many versions of Billy Liar whereby theatre groups have made a parody of Northern people.  I wanted to try and bring a more naturalistic quality to it with elements of theatricality, rather than vice-versa. There is also no reason why it should be set in the past because all of the threads of the play are just as relevant today.

What relevance does the play have for today's audiences?

Ultimately the play is about ordinary people (whatever that means) trying to make sense of life.  Billy Liar is also about being trapped but not really knowing how or having the supporting mechanism to break free. I believe that most people can relate to these issues.

What were the challenges of putting the production together?

There are audio visual (AV) elements to this production, so it's making sure that you don’t get so caught up in those elements that you neglect the performance side. Also, the text is so tightly written, in terms of comedy and the relationship forming that the pace and energy has to be at the thrust of the delivery, if not the play can become that sluggish Yorkshire parody that I mentioned earlier.

Do you have a particular approach to directing?

Its all about community, everybody involved should feel part of something and there should be no sense of hierarchy. Life is full of hierarchy so theatre should be escapism. In terms of the performances, I just want people to come and have a good night out, so I try and bring as much to the performances as possible, using things like AV, to try and embellish this.

Are there any other stories/plays that you would like to direct?

I’m currently looking for the next play. Preferably just something that reflects some sort of reality of modern life.

What next for you?
Well hopefully, we (Paperzoo) can get our heads together soon and choose our next production.
Also, I'm looking to quickly move onto another play and in-between maybe do short films also. Nothing too fancy, like.

There are still a few of chances to see Billy Liar over the coming weeks. We are at The West Lane Baptist Church in Haworth on Saturday 13th of May, at Ilkley Playhouse on Thursday 18th of May, and the mini-tour ends on the 1st of June when we perform at 7Arts in Leeds.
Details, rehearsal photos and other info are on the website www.paperzootheatrecompany.co.uk

Posted by Damien O'Keeffe at 08:50 No comments:

All of us here in the Zoo were very sad to hear of the recent passing of Sir John Hurt. Not only was he one of the most respected actors of the last 50 years, he was a great supporter of young talent. 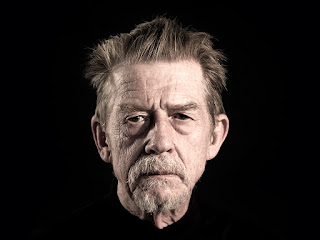 Back in 2009 when we were commissioned by The National Media Museum to present a version of George Orwell's classic dystopian novel 1984, to mark the 60th anniversary of its publication, we were discussing various ways to portray the character of Big Brother. After several false starts, including a subversion of the logo for the then popular Channel 4 reality TV show, someone suggested that we contact John Hurt and ask him. As research for our production, we had watched Michael Radford's film version of 1984 starring John as Winston Smith. It seemed somehow fitting that he should appear as Big Brother. 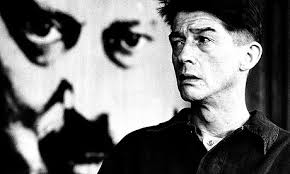 We laughed...why would one of the greatest actors in the world get involved in a small-scale production by an unknown, unfunded theatre company from Bradford? But then someone asked, 'why not?' It had to be worth a try. So, a few days later, one of the Company contacted John's agent and asked if he would be interested in helping with our production. We waited for a reply. The best that we hoped for, if we got a reply at all, was the permission to use a photographic image of him as a projection.

A couple of weeks went by, and we had no word from John's agent. We carried on rehearsing the production, planning how we could film some of the sequences to make use of the screen in the Pictureville Cinema, still trying to work out how to represent Big Brother.

And then we got a reply: John would love to do it but he only had limited time between work commitments. He could give us a couple of hours, in a few days' time, in London.

As we were working with the National Media Museum, part of the National Science Museum group, we were able to make use of a room in London to film a short sequence that could be projected during the production. Quickly, Ben (who had made the initial enquiry, and was playing the character of O'Brien), Martin (who was directing the filmed sequences) and Oliver (the AV designer and photographer) got the kit together and headed off for London.

When John arrived he was already in character - he hardly spoke whilst the equipment was set up, and the shots prepped. He delivered a chilling performance. His years of experience meant that he knew exactly how much, or to be more precise, how little he had to do. His steely gaze looked right through you and, when projected onto the screen in the Pictureville auditorium, made you feel like he was reading your mind and seraching your soul. 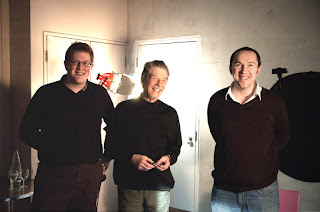 Once the filming and photography was complete, John relaxed and became much more animated. He asked about the Company, and about how the production was going. He then suggested that he read the final paragraph of Orwell's book so that it could be played over the last moments of the show. It was a brilliant idea. Every time we performed the show the audience would gasp as John's unique voice came over the speakers,

"Winston gazes up at the enormous face..."

John kept in touch during the next few months. Unfortunately, due to work commitments, he was unable to see the production. However, when he found out that we were to take the show to The Quad Cinema in Derby where he was Patron, he invited several of the Company to 'An Evening with John Hurt' - a screening of one of his films folowed by a Q&A session. On the night we were given the chance to meet him before the event, and he was as interested in us as we were in awe of him. He wished us luck with the tour, and seemed genuinely disappointed that we were unable to stay for the party after the screening. 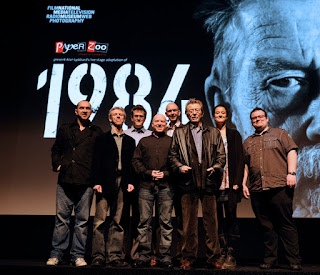 We met him again in 2010 when he was guest of honour at the Bradford International Film Festival. He had a photograph taken with members of the Company and, once again, took delight in catching up with how the production had gone. We told him about the positive reaction that we had had to the show, and how his contribution had encouraged us to raise our game. He just smiled his twinkling, mischievous smile, and said in that wonderful voice of his, "Well, that is good to know, thank you."

No, thank you, John, for giving us your most precious gift - your time.

Posted by Damien O'Keeffe at 16:25 No comments: