As if keeping all of the Zoo Creatures in check, teaching on the HND Performing Arts course at Bradford College, and raising three growing children were not enough to keep a person busy, Company founder member and one-woman engine room, Julia has found time to take on another challenge.

Working in conjunction with The Royal Shakespeare Company and Bradford Theatres, Julia is the Learning Performance Network co-ordinator for the Bradford area. Her role is to provide the artistic and creative input into the LPN which links secondary schools, primary schools, and special schools with the RSC to provide a living, active approach to the teaching of Shakespeare's texts.

The first cohort was set up in September 2013 with Bingley Grammar School, in Bradford, acting as the hub school, and has four further schools all benefitting from regular practical workshops from Julia and other practitioners from the RSC. As well as the students, staff also get to learn the techniques used in the rehearsal room to bring to their teaching; techniques that can be used across all subjects in the curriculum. Students get to grips with Shakespeare's language and imagery in ways that make it accessible and fun. Regular trips to Startford-upon-Avon, as well as visiting productions allow the students to experience the excitement of a full-scale production. The three-year project builds upon the learning undertaking in year one and leads to a Shakespeare festival in year three.

The practice of the LPN is backed up by years of active research into learning and play, and has been written about in many books and articles. There is also a link with the education department at The University of Warwick where Julia has been studying for a post-graduate award in teaching Shakespeare.

The second cohort has now been set up with Samuel Lister Academy taking the lead, and things are all set for work towards a series of performances linked to the RSC's production of 'A Midsummer Night's Dream' in 2016.

"This is a wonderful project that empowers students and teachers, parents and communities to get involved and be part of active learning. Shakespeare features even more in our school curriculum now, and if it is to be enjoyed, and for its wisdom to endure, it needs to be brought to life in an active arena. This is what is being given back to education through the LPN, taking active rehearsal room techniques straight from the heart of Stratford and into a classroom near you."
Posted by Damien O'Keeffe at 13:45 No comments:

Welcome to our newest associate artists

We are very pleased to welcome our newest associate artists to the Zoo. Sophia Kelly and Danni Shepherd have joined us recently to be part of the cast for our Spring/Summer 2014 tour of Hard Times. As well as being weavers in the production, Danni will take over the role of Louisa Gradgrind, and Sophia is playing Mrs Pegler and Stephen Blackpool's wife. Both Danni and Sophia are currently studying Performing Arts at Bradford College, and have shown themselves to be very talented and reliable members of the course.


Sophia is in the final year of her HND in Performing Arts, and has been at the College for almost five years. In that time she has taken part in numerous productions both on stage and on screen with the British Youth Film Academy. Her youthful appearance means that she has often been cast to play parts younger than her actual age, for instance, Sophia has appeared with The Touring Consortium's productions of 'Kes' in 2009, and 'To Sir, With Love' at The Alhambra Theatre as part of the national tours of those shows. Sophia has been involved in feature-length and short films with the BYFA, including 'Richard II', 'Faust's Growth', 'The Rochdale Pioneers', and 'Cache' (due to be premiered at The National Media Museum in April) Sophia has just completed her first directing project in which she staged an extract from Tennessee Williams' play 'A Streetcar Named Desire'. We are sure that she will continue to develop her artistic and theatrical vision, and we are delighted to be working with her on Hard Times.

Danni is about to complete her Level 3 Extended Diploma in Performing Arts with the maximum marks of D*D*D* and has impressed everyone with her natural ability and dedication throughout the two years she has been at Bradford College. Danni is much in demand as an actress, and has gained a lot of experience over the last year or so, performing in numerous productions and short-films. Danni is in the process of auditioning for drama school and other training opportunities. She has an audition coming up with the excellent Fourth Monkey Theatre Company ensemble, and we wish her the best of luck with this. Hopefully, Sophia and Danni will enjoy working with us on Hard Times and we may even be able to encourage them to write a post or two about the production process.
Posted by Damien O'Keeffe at 17:09 No comments:

Catching Up With The Zoo Creatures

Things may have gone quiet on here for a while, for too long probably, but don't be deceived, the Zoo creatures have not been in hibernation. Whilst the Company as a whole took a rest from mid-September once the Hard Times tour was over, the individual members of the Company have been keeping busy with other projects and activities. The next couple of blog posts will be dedicated to catching up with what people have been up to. After that, we will be bringing you news and views from the Zoo about current productions. Thanks for your patience so far...

The first of the catch up pieces concerns Paper Zoo founder member, David Peel, and the very busy time he has had in the last few months.

After his cameo appearance in Clio Barnard's brilliant British film, The Selfish Giant, Dave was recently cast as a BT engineer in the forthcoming feature film, Altar, which was shot on location in the village of Minskip near Knaresborough. The film, which has a supernatural theme, was written and directed by Nick Willing, and features Olivia Williams (best known for her role opposite Bruce Willis in The Sixth Sense) and Matthew Modine (Full Metal Jacket, Birdy etc.)
Apparently, Dave's audition tape caught the attention of the film's producer who immediately saw the charisma and character that Paper Zoo audiences have known and loved in all of his stage appearances. So much so that Dave was offered the role in a matter of days! Dave was not so sure that it had all gone so well,

"To be honest, when I left the audition, I thought I'd blown it because I was rabbiting on at Nick Willing and the others in the room (among them the film's editor, and renowned casting agent Amy Hubbard) I called my agent and said so but within days I had the part! I was so overjoyed at the news. Whatever it was that I did, I must do again!"

Dave has since been on to take on a rather different role, this time that of First Assistant Director on the shoot of a pilot for a new sit-com called 'School on Report'. The project which was directed and co-written by Bradford actor Lee Otway, is aiming to be commissioned for a full series. The four-day shoot took place in two local schools. The first, Thornhill Community School, was used to having cameras on site as it recently featured in the recent hit Channel 4 series, 'Educating Yorkshire'. The second school was Ralph Thoresby in Leeds. The cast is made up of some impressive names given that this is Lee's first directing project. Well-known character actors John Henshaw and Mark Benton were both involved, along with a young cast of talented local teenagers.

"When Lee asked me to help out, my first thought was 'do I want to?' I'm an actor and I know nothing about being an AD. But as soon as the project began I utterly, utterly loved it! It has to be said that it was made easier by everyone on set being just brilliant and understanding of my mistakes. It is another string to my bow, and now all fingers and toes are crossed for Lee and his co-writer Ross Marshall for them to get the commission that they truly deserve and have earned." 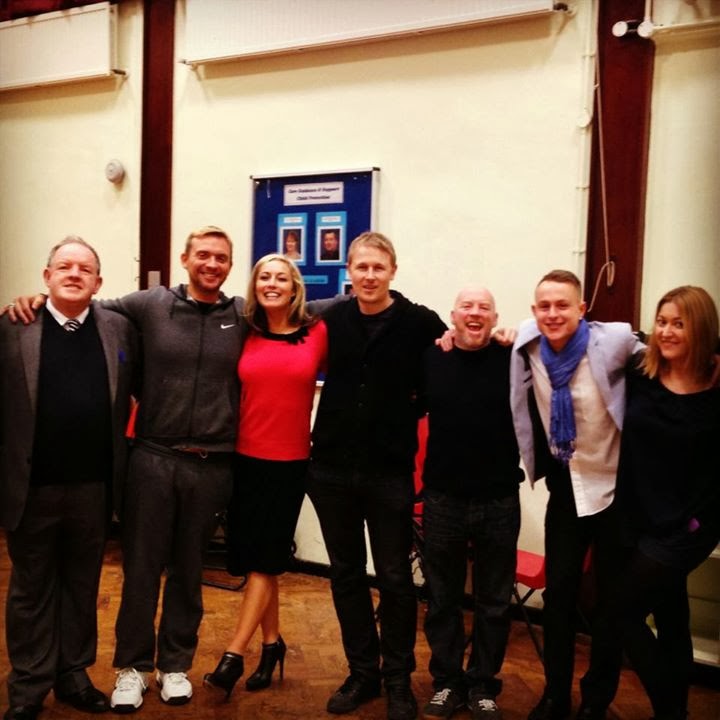 As if this were not enough, Dave has also been working with Bradford-based Freedom Studios again. He had previously been part of the small group of actors who had performed the new works in the Street Voices 4 season last year. The company's artistic director, Deborah Dickinson, asked Dave to come and read, along with other local actors, a script by local writer Chris Wilson. The play is about the famous Batley Variety Club and has the makings of a brilliant play. Chris is a talented writer and Freedom Studios are very generous with their time and support for local writers, directors and performers.

You can find out more about Freedom Studios here
Posted by Damien O'Keeffe at 14:26 No comments: