Marc Chagall - a visual influence on The Tempest

In creating the world of the play, we rely on a wide range of influences to inspire the process. In terms of how the play will look, our director, Julia, has turned to the paintings of Marc Chagall. (1897 - 1985)

His use of colour and symbolism is providing a rich palette of ideas to draw from. Recurring themes of the bride and groom, spiritual elements, and dream-like states are mirrored in the text. Already we have begun to identify some of the characters from the play with figures in the paintings.

This is not to say that we are relying on Chagall's work for our final visual style, but rather that we are adding his influence to the pool of ideas that draw upon.

It pays to remain open to all kinds of inspirations and influences; they can take us to some surprising places.
Posted by Damien O'Keeffe at 11:53 No comments:

Another rehearsal on the Tempest this week that found us mining even more from the text. We are finding references in the play that are spinning us off on some really interesting tangents.

Prospero's Isle is developing into a game board where he plays the characters like chess pieces. This, in turn, is giving the actors the chance to explore how they move in the space as they are 'brought into play' by Ariel at Prospero's bidding.

As ideas and discussion open up new possibilities, we actors are responding by finding new ways of relating to the text, and to other characters. Having a relatively small cast means that we have to multi-role anyway, so the chance to draw clear distinctions between our roles in terms of movement as well as characteristics is really helpful.

As we know, seldom is anything black and white, and certainly on Prospero's Isle, things are not always what they seem. This merging of truth and fantasy, of nature and the supernatural, gives us much to play with. The course of the story, from tempestuous opening to the calm reconciliation at the end, is Prospero's gameplan enacted. He stands at the centre of the labyrinth into which he draws the other players, and from which they must escape.
Posted by Damien O'Keeffe at 13:15 No comments:

Rehearsals are now well underway for our latest production. The cast are being assembled (still a couple of parts to be covered) and scenes are taking shape. The photo below shows Emily, Jeremy and Jamie being directed by Julia.
It is great to be working on a Shakespeare text again; there are so many discoveries to be made in the text about character and meaning. As actors we are given so much to work with.
Finding meaning and relevance for today in words written over 400 years ago is wonderful and humbling - Shakespeare certainly knew about the power of words; we need to tap into that power in these tempestuous times. 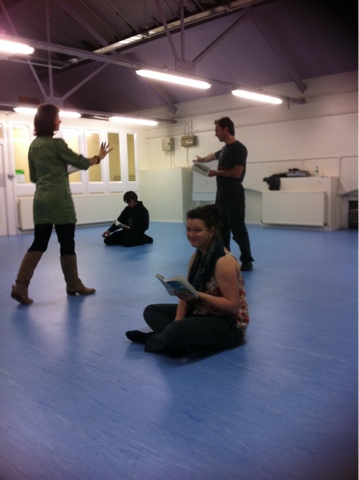 Posted by Damien O'Keeffe at 11:41 No comments: